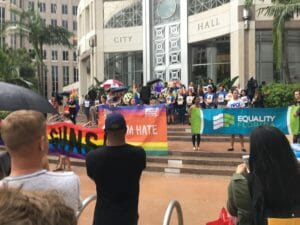 On the eve of the anniversary of the Pulse tragedy, Orlando gathered at city hall to not only mourn those we lost, but to commit to taking action to ensure that these tragedies do not continue to plague our country. In a program lead by Representative Carlos Guillermo Smith, those who gathered were addressed by survivors and families of those affected by Pulse and the Marjory Stoneman Douglas shooting as well as members of the LGBTQ+ community and faith leaders. Two major themes were present throughout the night; love and taking action to end the senseless gun violence that has victimized far too many. This is but the first of many other events planned this week and a detailed list can be found at the One Pulse Foundation website.

Orlando Gathers at City Hall in Remembrance of Pulse

This website uses cookies to improve your experience while you navigate through the website. Out of these cookies, the cookies that are categorized as necessary are stored on your browser as they are essential for the working of basic functionalities of the website. We also use third-party cookies that help us analyze and understand how you use this website. These cookies will be stored in your browser only with your consent. You also have the option to opt-out of these cookies. But opting out of some of these cookies may have an effect on your browsing experience.
Necessary Always Enabled
Necessary cookies are absolutely essential for the website to function properly. This category only includes cookies that ensures basic functionalities and security features of the website. These cookies do not store any personal information.
Non-necessary
Any cookies that may not be particularly necessary for the website to function and is used specifically to collect user personal data via analytics, ads, other embedded contents are termed as non-necessary cookies. It is mandatory to procure user consent prior to running these cookies on your website.
SAVE & ACCEPT